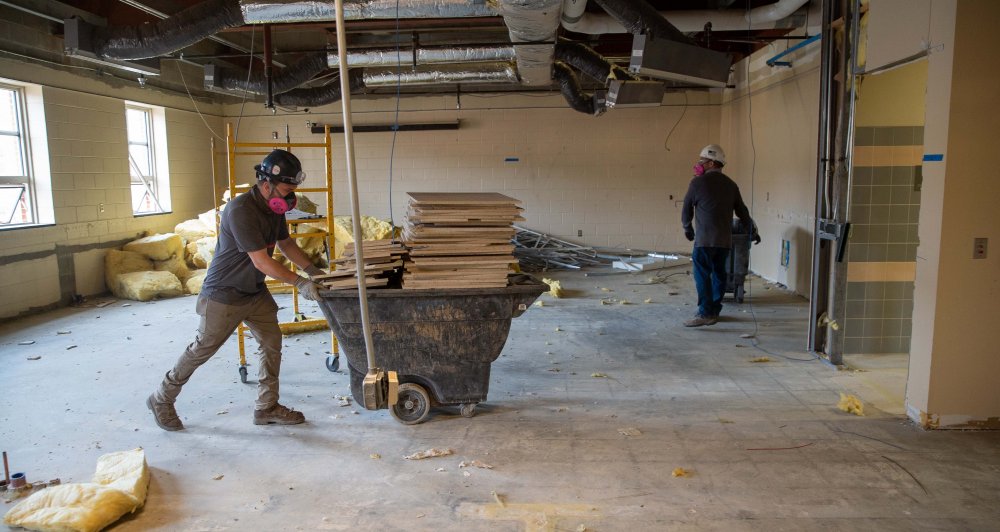 Pitt-Titusville President Catherine Koverola wants to get the word out about the Pitt–Titusville Education and Training Hub.

“We have launched, we’re all systems go,” said Koverola, who also oversees Pitt–Bradford.

Renovations at the Broadhurst Science Center also started this month after the COVID-19 pandemic delayed the process last year.

The Manufacturing Assistance Center is also in the process of moving parts of its operation to the hub, said David Fitz, Pitt-Titusville’s interim executive director and dean of students.

Pitt-Titusville also received a $1.2 million federal grant in September 2020, which will be used to fund a year’s salary for two new positions created to help build the MAC center at the Education and Training Hub. The grant also will go toward the development of the hub’s medical assistant program.

And new programs are on the way, Fitz and Koverola said. In addition to the programming Manchester Bidwell, the MAC and the Northern Pennsylvania Regional College offers, a culinary arts program is coming down the pipeline.

The hub and its programs are being developed with the needs of the region and its industries in mind, Koverola said. This strategy helps Pitt remove barriers people are facing in workforce development and stay consistent with its community engagement efforts.

“Wherever they come from, whatever curveballs have hit them, whatever challenges they faced in life, we have entryways for people to come and get trained and educated so that they can be gainfully employed and have agency and support themselves and contribute to their community,” Koverola said.

Students also will have the opportunity to continue their education beyond the hub. For example, culinary arts students can transfer to Pitt–Bradford’s hospitality management program. Students can begin with a MAC certificate program, then funnel into Pitt’s engineering programs in Bradford.

David Fitz said the plan is for construction on the Broadhurst Science Center to be done by August of this year. Eventually, the center will be the home of the nursing program.

The medical assistant program, a 10-month certificate offered by Manchester Bidwell, will start in September and also will be housed in the science center.

More construction projects are on the horizon, Fitz said, as the hub has been approved to explore construction and renovation in the McKinney Student Union for the MAC. Right now, they’re in the process of looking for an architect.

In the meantime, Pitt–Titusville officials are looking for a temporary space nearby that can house the MAC programs.

Fitz said the hub’s programs will be affordable, and financial support will be available to students.

Manchester Bidwell’s programming will be free and admit up to 15 students per cohort, Fitz said. The nursing program offers merit scholarships as well.

Additionally, Fitz said, Northern Pennsylvania Regional College’s programing costs about $185 per credit hour, and financial aid will be available. And if a student wants to be in Pitt–Titusville’s nursing program but isn’t admitted right away, they will be able to take courses through NPRC that will help them prepare for Pitt-Titusville’s program.

“The idea there, and the whole idea behind the hub, is that you’re not paying Pitt prices for those general education courses, you’re paying NPRC prices,” Fitz said.

The MAC will work with each student to see what options are available through state or federal agencies to help cover most, if not all, of the tuition cost.

Pitt–Titusville isn’t a residential campus, which helps cut down on staffing and infrastructure costs, Koverola said. But students will have a hotel-like option where they can stay by the night. Pitt–Bradford hospitality management students will be able to intern at the bed and breakfast hotel.

The school will be in regular communication with community stakeholders to best determine the school’s needs. Fitz said the hub is in a much different place than it was last year.

However, Fitz said the work is far from over.

“It’s really nice to have some meat and potatoes to the meal, to really get some substance,” Fitz said of the finalized partnership deals and ongoing construction process. “But let me be clear, every time we get a little more substance, as I tell everyone, means we have more work to do and more substance to build.”

Koverola is confident that the hub is on track and is positioned to be successful.

“I’m really proud to be part of Pitt and Pitt’s commitment to the people of Pennsylvania and of this region and to this community,” Koverola said. “And it hasn’t been easy. It’s been a risk. And Pitt has taken a risk for the benefit of this community. And it has stood fast and, Pitt is an … anchor organization in the community.”

When Koverola first came to Pitt–Bradford/Titusville in 2019, she believed in the vision for the hub. She saw it as a way to help remove barriers, allowing people in the region to have agency and make a difference in their lives and the lives of others in their communities.

And that agency is especially important for the region, Koverola said, since it is economically depressed — with a lack of jobs and lack of opportunity.

Students have been caught in a “vicious cycle,” she said, where they drop out, leaving employers without a qualified pool of potential employees.

The cycle has created a culture that develops despair, she said.

“When people can’t be gainfully employed and support themselves and their families, towns and communities, they wither away,” Koverola said. “And crime comes, substance abuse comes, bad things happen. And it’s not because people are bad or because they’re lazy. It’s because they don’t have the opportunity.”

But the hub is designed to help break people out of that cycle.

“The hub is about removing despair,” Koverola said. “It’s about giving people hope.”

Donovan Harrell is a writer for the University Times. Reach him at dharrell@pitt.edu or 412-383-9905.